I haven’t seen the changes first hand. But I do know that I’ve emphasized several times that Exura Immune is broken. When you put a ”constant/unchanging” spell with 3 other spells > that’s the complete opposite, you will without a doubt find an unbalance. As Old Powerz vaguely explained, ”there’s no real difference between a rebirth 1000 and someone higher”, since that’s how it was ”designed”. While other spells are designed to increase in damage as you progress through the game. (There’s obviously a difference, but I think you get the point).

I decided to put a chart to vaguely explain the situation. HAVE IN MIND THOUGH that the chart is not accurate at all – So it’s a bit unjust. But it’s just to explain ”what’s” happening/going to happen. 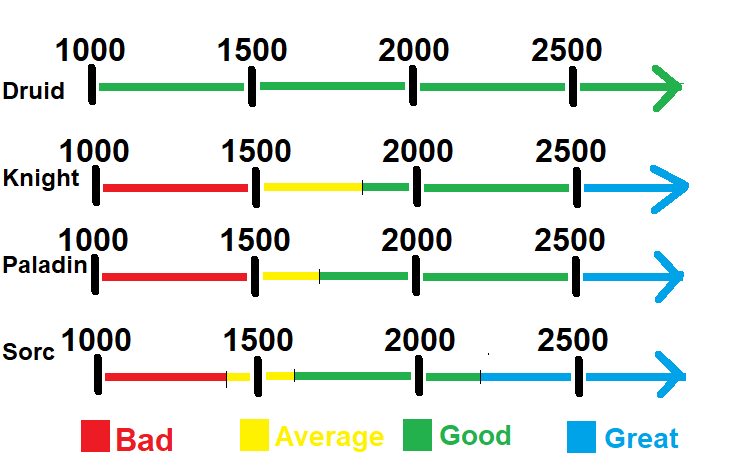 As mentioned, the image is obviously NOT accurate. While Immune is good for PVP, quests, World Boss and of course the option to cast it on a friendly target > it’s kinda useless for hunting. While other spells are average/good for hunting but situational/good for PVP. So it’s hard to fully rate any of the spells since 1 is supportive and the rest are offensive.

”When you inject a spell that’s not based on rebirths, it will excel in the lower rebirths and eventually tune down compared to the other spells until it’s rendered useless..”
I’d like to insert that I don’t think Exura Immune is bad, - not at all. It’s just the point that it excels to much in the lower rebirths and takes ”lots ’n lots” of rebirths before it eventually tunes down a bit while remaining vocations has to wait far longer to gain advantage with their spells.

I also don’t have any solutions to the ”problem” since I believe 85% are fine with how it currently is. But it’s worth to note that the reason why both SD and MR has changed several times is because of this darn Immune spell. And that just starts another issue that leads to another issue

2018-11-07 #23329
Immune spell more like survival spell but not damage dealer or any kind of helpful than surviving spell, also it makes staff think, it's powerful unfortunately it give advantage for many low rebirth's beside they decreased damage of spells and sd + decreasing heal of ultimate mana,,,
while eks and rps has alot of additional on their vocations which helped them to survive and fight back and also become damage dealers they obtained other vocations duty, beside their own duties.

2018-11-08 #23330
immune spell is supportive/offensive and you can't deny that.
can you list me what are the additionals on paladin/knight vocation?
be more specific with what you say because you end up looking so dumb
what kind of duty did other vocations take?
of course you'll tell me paladin has utito tempo san ( it makes him unable to heal for x time), paladins have flurry that deals good damage ( but takes up alot of mana which would make him an easy target) and dont forget with the new changes all vocations heal less.
you're just saying things for your own need.
maybe you just need someone to train your druids to use healing. yesterday i tanked all of your team with just druid's distance heal.
edit: you should probably check the high scores and you'll see which vocation is more loved


Quote:
Mage should be highest damage dealer " Sorcerer "
then druid because difference between them isn't that high its only at Sudden death damage and flam damage, but vis its same as terra, it doesn't mean i need druid to be second vocation to make damage it's ingeneral all over tibia not here
Paladin, has merger, utito tempo san which allow ultimate sniper to use it even in mid of war and mid of trap or where-ever he is because of his high rebirth and he has opportunity to survive damage of opponent because additional of protection and damage he gained, he puts stress on his opponent to choose between healing himself and freeze him or run, plus he has huge damage and if he got 1 nova sio not immune but nova sio he won't die, so basically he become huge tanker due to his rebirth, although, as paladin he heals 15% with ultimate manarune.
Knight, became damage dealer and the ek 2500 has highest damage at server beside his huge hp + 20% more hp additional + utito tempo + healing ultimate mana 15% + spell has no exhausting and he is supporting vocation he has exeta taunt and exevo grav vita.
Sorcerer damage of 1900 higher than old powerz, the guy who plays on it who confess so.
what did i gain as high rebirth druid? exura immune it's same as 1000 rebirth so if 1000 casting it he is same as 10000 casting it, damage reduced and healing mana reduced so i need now like 5-10 players druid at my guild all of them arranging casting exura immune on me so i can survive and nova sio.
even after i get 2500 i cant kill 1400 druid 1 freeze with ml 152....


Quote:
u tanked all my guild because u have many low rebirths who just immune u and sio u, so sure u will survive

old powerz and sir satan dead while most of our teammates heal him with ultimate manarune and nova sio and we meant not to use immune on these chars to see if nova sio and ultimate mana gonna stand against ur guild damage or na, but it didn't work, doctor powerz got bombed by whole ur guild once we used heal on him he survived because of 35% protection 20% more health,,,
sequill survived damage of ultimate sniper alone while druid 1850 couldnt do same...

2018-11-08 #23332
Actually Immune spell is only supportive. I believe most highexp people don't know the concept of a supportive spell.

2018-11-10 #23338
im feeling tired of this but
get me a sorcerer 2500 reb and lets test his damage but if you give me old powerz and im against 1900 druid or sorcerer i'll prove that i can solo, and i proved that i soloed diktatorn youssef (druid) infront of you and i soloed admin on someone again (sorcerer) multiple times with 2200.
normally you dont kill knights or ( paladins in some situations) if druids are surrounding them you have to kill druids first, i would love to tell you that paladins and knights no longer heal 15%.
how can knights have the highest damage if it takes him 10 targeting a single player to take his buff and if you freeze him and walk away he'll have to wait more 10 seconds, Old Powerz's sd without immune or cap is stronger than Ner'fs hur gran mas with utito tempo, exeta taunt is once every minute and i dont really think knights can save teammates with it exevo grav vita is really easy to cut through.

thing that really makes me laugh after bot is removed you began to complain a lot more it seems you're just a person who depends on bot to play than personal skills.
if you see last threads or w/e complains you do you're just repeating yourself over and over.

@riesen i don't think you've seen the changes yet

2018-11-10 #23339
Yes the Immune Spell is the same during all rebirths, however it's also the best spell in the OT during every rebirth.
Also I know it's useless discussing with you Old, since your numbers and statements are always pure made up nonsense, however I can't just let it stand as it is since unfortunately some person decide to walk the earth with pink tinted glasses and just eat the bullshit that is served infront of them.
Nerfs healing of Ultimate Mr is 9%, since every vocation was affected by the healing nerf of Ultimate Mr and the % display was just not updated accordingly, otherwise I suppose you don't heal 11% do you, huh?
Also about me being the best damage in server.
I guess Its Druidzz who is 300 rebirths lower and a far lower magic level than you, used some bug to dethrone me, since he excels in every damage aspect against me. ( Meaning his SD > My SD/hur mas)
Keep in mind the whole text up above was a lie made up by me, since naturally Old Powerz doesn't lie or make up bullshit.
Jokes aside at the end of the day you will just get called out or proven wrong like always as certain as the sun will rise, but sadly I am most certain that some people will believe in your words even though it's bullshit. ( I guess you would make a good sheikh

Pretty sure I mentioned that I haven’t seen the changes first hand. So yes, you’re partially right. I have though done some test myself to figure out most of the changes since most players don’t seem to be aware of most of them. This is the issue when changes are applied and not shared with the community.

Self tests are obviously just a base to see changes that occure.. mainly because PVP-situations differs. Even so, there’s quite a few things that baffles me. Example;
1) Why did mana train change from 9-10% mana to 6% mana(?)
2) Why was the exit-client changed to be useless considered how hard it is to train and the increase with x-skill being almost non-existing(?)
etc etc etc etc… →

Regarding immune though, which is why the thread was started in the first place. I obviously got my own view and I still think the spell is broken. Supportive spells are tricky to add to any game. And even more tricky when you have to consider how each vocation is already designed without the spell in mind.. Basically a spell could be OP/bad but the vocation bad/OP..


Quote:
So knight and paladin heals more than druids. although druid using same amount of mana cost for it's spell beside mana is it's first defense line.
beside u have 35% death protection and 20% health increasing, if you talk about mana decreasing the spell u are using with percentage not with certain amount of mana

and it has no exhausting, so if druid healing you crosshair and attacking target with sd u will be killer machine with burst damage beside his damage :_)

2018-11-11 #23342
Old powerz why do you love repeating yourself over and over "and it has no exhausting, so if druid healing you crosshair and attacking target with sd u will be killer machine with burst damage beside his damage :_)" i guess you're talking about me.
anyway we're talking about the immune spell why are you stuck in the past 35 death protection 20% health increase you just dont make sense.
i would love to test old powerz's damage compared to other players and trust me if i have 2500 with 150 ml like old powerz i would kill 1800 without even trying my best.
if crosshair was that easy to use you wouldn't complain about mana per soul because you dont have enough hotkeys ( such a bot user )